Uranium Drive-In is currently touring film festivals around the world. We hope you can catch a showing while it is in your area, if you can’t find a local showing you can arrange one by contacting contact Reel Thing Films http://uraniumdrivein.com/contact.html. 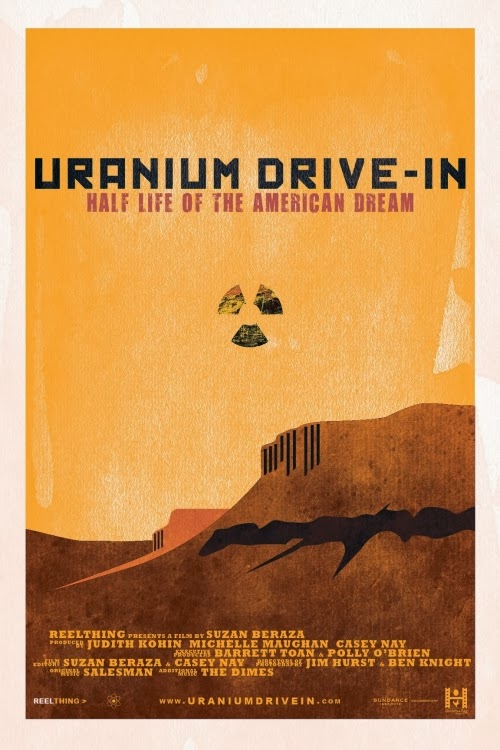 “The
promise of jobs from a proposed uranium mill has an economically
devastated mining community in Colorado hopeful for the first time in
decades. When environmentalists step in to stop the mill, pro-mill
advocates are enraged. A debate ensues, pitting jobs against health and
the environment.


Without
judgment, both sides of the issue are brought to life in
heart-wrenching detail as the film follows conflicting visions for the
future. The film offers no easy answers but aims instead to capture
personal stories and paint a portrait of the lives behind this nuanced
and complex issue.”

Uranium
Drive-In is a movie about uranium, only… it really isn’t about
uranium at all. It is about the people whose lives have been affected by
uranium, both good and bad. It is a movie about passion, about people
who are passionate about saving the environment but it is also about
people like me.

It’s about what happens to a mining town 30 years after the last boom ended.

Uranium
Drive-in is a very special movie to me and my area, and it’s not just
because I was involved with the project. Being granted the opportunity
to speak about my love of my area and the people in it was a huge honor,
but knowing that our story will be shared with people all over the
country and even around the world is phenomenal.

To find out more about the movie, visit the Uranium Drive-In website.

My
involvement in the movie began a few years ago when Casey Nay called me
and said they had read on of my Squidoo lenses about my hometown and
they wondered if I would like to do an interview. That article, Hippies, Uranium and Prairie Dogs… Oh My – My Hometown Nucla, Colorado was a humorous look at the my home town roots, and the somewhat odd history of the town that I love.

I
warned them early on that I wasn’t exactly the average citizen of our
rather conservative area, and in no way could I represent the people
here. What I could do was tell them what it is like to live in a town
that you dearly love, and slowly watching it die. The promise of the
mill was our life support here for a very long time… but our happy
ending has not yet arrived.

Now
that Energy Fuels has purchased the White Mesa Mill in Blanding, UT any
plans for the Pinion Ridge Mill that was to be built in our area have
been placed on hold indefinitely, and no other jobs have followed. 1200
people are still waiting for the day that the jobs will return to our
area…

Uranium Drive-In opens up a real dialogue about
the future of small mining communities all across this great country.
What happens when the mining stops and the jobs leave?

That my friends is a question still left unanswered.

After
the movie, a small group of people from Nucla/Naturita and Telluride
came together to discuss ideas for reviving our economy.

A few of the ideas presented so far:

Mining tourism: A uranium museum, mine tours (non-radioactive of course) and even gold panning expeditions.

Festivals: We have discussed the possibility of a festival here, music, food, merchandising vendors, camping, and even a zombie prom.

Walking tourism:
Create a small shopping district that offers small cafes, boutiques,
free internet, and in between the businesses space for weekend vendors
and performers to set up.

How do we make those things happen?

With
a little help from our friends… if you would like to offer ideas,
services, or even financial assistance to make our stone soup revival
possible, join our Facebook Group